NEW! Commedia Per Tutti – Rumble in the Canales!

When it is announced that there will be a wooing contest for the hand of Il Conte’s daughter Maria, several of the men in Venezia decide they must win at all costs. Competition seems easy until a handsome mystery man appears the day before. To what lengths will they go to ensure their victory? Will Maria be doomed to her fate or discover her destiny? Come see all the action, adventure, and, of course, romance here within the town of Venezia! The Musical! On the Main Royal Garden Stage. 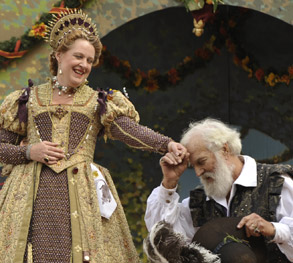 The village dignitaries have been planning for Her Majesty’s arrival to celebrate the annual Harvest Faire. The Queen’s courtiers are busy competing for her favor when dignitaries from Spain arrive with another agenda. The Queen’s procession lands at 2:00 on the Main Royal Garden Stage. 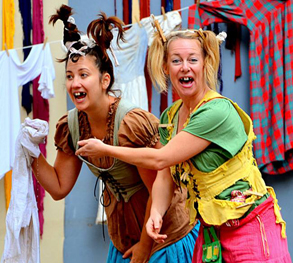 Wet dirty women and good clean fun is what this show is all about. These hilarious wenches will teach the unsuspecting a thing or two about cleaning up their acts and how to dish dirt with the best of them. Three times daily on the Amethyst Arbor Stage. 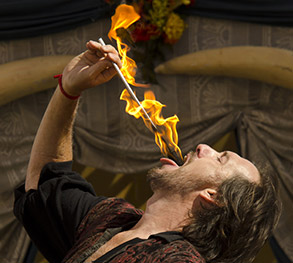 With a wit drier than the Sahara, Broon will leave you giggling throughout the day. Broon doesn’t eat fire to impress the crowds, he just likes the taste of the kerosene. Four times daily on the Romany Camp Stage.

A man of skill, a man of danger, and some would say….a complete lunatic. Cy is a master of the blade. Witness him swallow a whole armory of swords of different shapes and sizes ranging from the smallsword to the curved scimitar. No two shows are the same. With variety, audience participation and comedy. Cy will leave you thrilled and entertained. Four times daily on The Romany Camp Stage. 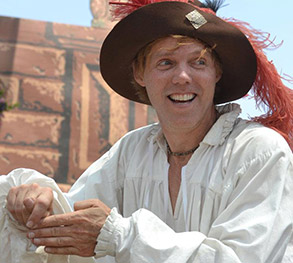 Part variety, part danger, all hilarious. Willy Nilly, a frolic-some fool, delivers laughs for the whole family as he risks his safety for your amusement. From his whip tricks to his One Man Shakespeare to his fruit-flinging finales, don’t miss this hilarious show that made the Queen say, “We ARE amused.” Three times daily on the Amethyst Arbor Stage. 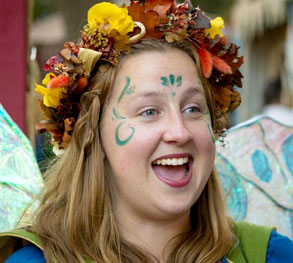 Bring the wee ones to sit with Willingtown’s own Fairy Godmother as she spins tales of magic and wonder. Especially for children but big kids are welcome too. Three times daily on the Storybook Stage. 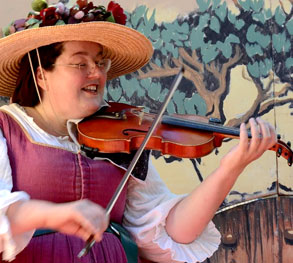 Shelly, the village fiddler, loves to teach aspiring musicians as well as play. Enjoy her vibrant sets on the Storybook Stages and around the village. 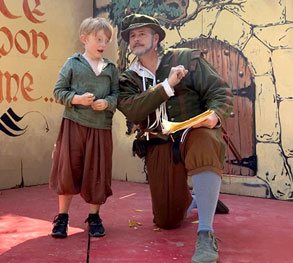 An unscripted forum with the Bard himself to discuss and explain his plays as well as give any audience members a chance to step up on stage and perform.  William Shakespeare has text on hand for those who don’t bring their own. He will help with making the lines conversational and the performance realistic. Come on by and chat with the poet and playwright! 11am on the Storybook Stage. 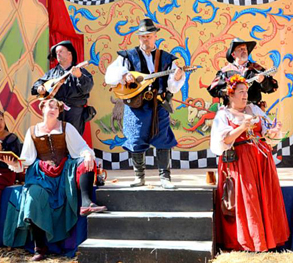 Join your favorite Poets and Minstrels as they share lyrical tales of romance, adventure and gold! Their bawdy music and wit-filled comedy is guaranteed to have you laughing and singing along. On the Coughing Sheep Stage. 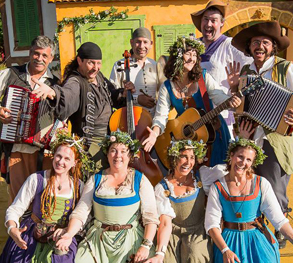 What do you do with a drunken sailor? These legendary masters of maritime music answer that age old question in song. Twice daily on The Main Royal Garden Stage and also on The Coughing Sheep Stage. 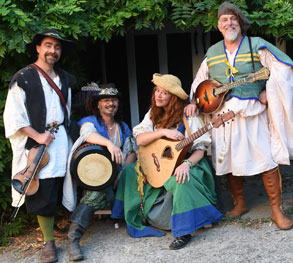 Hide the whiskey and lock up the beer: Barley Bane is here! Singing songs of the rebellious Erin’s Isle these Irish rogues will capture your hearts. Let the driving melodies and intricate harmonies of these loveable outlaws move you at the Coughing Sheep and Romani camp stages. Just don’t tell the Queen that they’re here! Sláinte! On the Romany Camp Stage and the Coughing Sheep Stage.

The Royal Equine Guild presents their rare collection of exquisite Gypsy Vanner horses and other magnificent breeds from across the land to Her Majesty the Queen. Just prior to each joust, at 12:30 and 3:30. 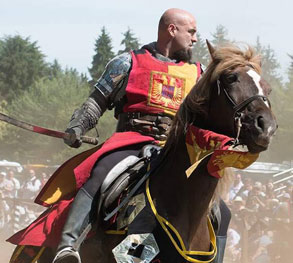 Armed with lances, swords and shields, The World Tournament of Champions Joust Troupe presents jousting, sword fighting, and games of skill for Her Majesty’s pleasure. The World Tournament of Champions features an experienced and professional team of Knights that collectively have been entertaining the masses for decades. Crossing lances is only the beginning of the fun and excitement this group delivers. Enjoy the Queen’s Tournament of Games at 1:00 and watch the knights compete for the title of Champion at 4:00 in a full combat joust. 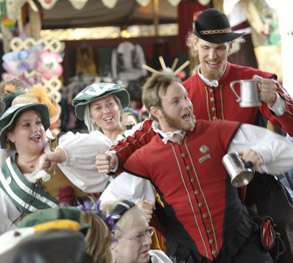 Come set a spell with the residents of Willingtown as they ring out the day in song. The Sea Dogs, The Naughty Minstrels and friends share laughter, ale and songs of revelry.