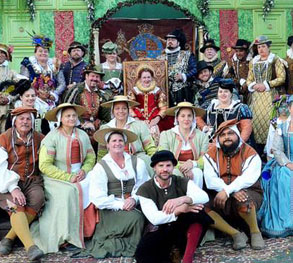 The Royal Court of Gloriana

The Royal Court of Gloriana portrays the court of Her Royal Majesty, Queen Elizabeth. We are delighted to be on progress with Her Majesty in the enchanting village of Willingtown for the annual Market Faire. We invite you to stop by Court Glade and join in our merriment. Toast to Her Majesty’s health, learn a courtly dance or listen to all of the latest court gossip and political intrigue.

We look forward to greeting you. God Save the Queen! 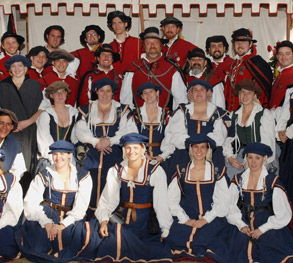 The Yeomen of the Guard

Established by King Henry Tudor VII in 1485, the Yeomen of the Guard protect the Queen as she progresses through the countryside. The Yeoman of the Guard serve as her security and as the bearers of her chair. Clad in scarlet red livery uniforms, they are found patrolling the streets of the market faire searching for unlicensed beggars, plague victims, criminals and other unsavory sorts. When you see them about the village, raise your cup, and say, “A health unto Her Majesty! God save the Queen!”

For more information, visit The Yeomen of the Guard’s website. 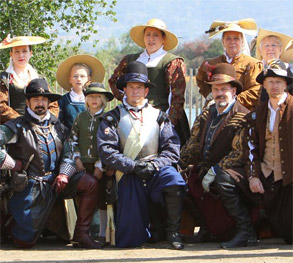 The Gentlemen Adventurers specialize in portraying Army and Navy military officers in the service of Queen Elizabeth I. These were the men responsible for establishing England’s first colonies, the exploration of the New World and heading England’s interests in military matters. These were men of money, education and fortitude. 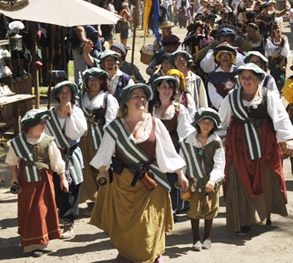 The Town Criers of Saint Blaise

The Town Criers are messengers, scribes, heralds, bellringers, and more! As the sons and daughters of the town’s middle class, we’re entrusted with a wide variety of tasks and responsibilities, giving us the pleasure of rubbing elbows with folk from all levels of society: peasants, constabulary, merchants — even the nobility! We lead parades with our bells held high, deliver the news of the day to the township, and smuggle court secrets. Most of us can read and write, which many come to regret when we read the day’s news to the general public! 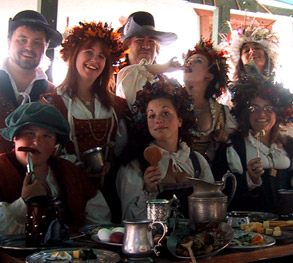 The Guild of Saint Cuthbert is a group of villagers who gather together to parade through the streets of Willingtown as well as presenting pageants that celebrate the season. They are known for their midday feast where many of the Willingtown notables are found dining in their Guildyard. Phoebe, the Merry Widow of Willingtown always has food upon her table and a story to share with the locals!

For more information, visit The Guild of Saint Cuthbert’s website. 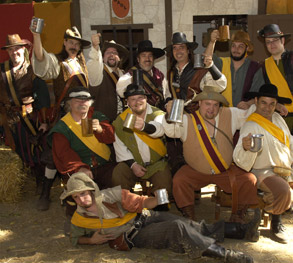 The Constables of St Bernard make up the unlikely lawmen of Willingtown. These “Keystone” style cops spend the day issuing tickets for infractions ranging from melon smuggling to ale abuse. These men keep the streets of our town ‘safe’ by inspecting the ale stands two or three times a day. They can be seen marching in formation. No one can describe this formation exactly but they always seem to amuse themselves! 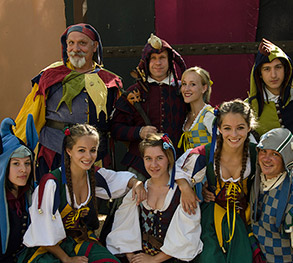 The Court of Misrule

Boink, the King of Fools, oversees his own court of motley jesters, jokers, and mischievious maidens. They can be found performing for Her Majesty and roaming the streets of Willingtown instilling merriment among the masses. These clever fools will jest their way into your cups and riddle their way out of trouble. With Tom-Foolery on their side what could possibly go wrong? 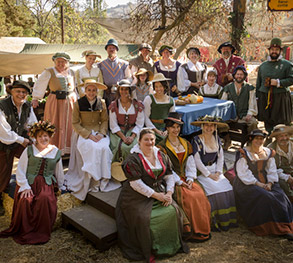 The Guild of Saint Luke

You would normally find the townsfolk of the Guild of Saint Luke in all the obvious places around Willingtown like the marketplace, and the guild hall. But during Market Faire, you will most likely find these likable merchants, tradesmen and goodwives at The Coughing Sheep Tavern gambling, singing, drinking and dancing. They are also known to join in a parade as it is just another excuse to celebrate life. They also serve as the village docents, always eager to welcome and guide visitors to Willingtown. 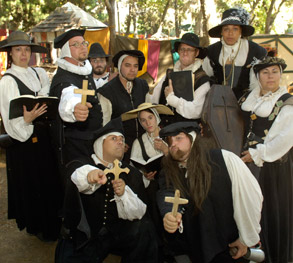 Dancing! Singing! Wine! Fine Food! Romance! Puritans hate all that. Expect this flock of self-righteous crows to appear anytime someone is enjoying themselves. Raise your glass in good cheer and kiss the one you love to chase these sour faced prudes away. Enjoy the revelry of faire, because they will assume you’re sinning anyway and whether you like it or not, they’ll be praying for you. 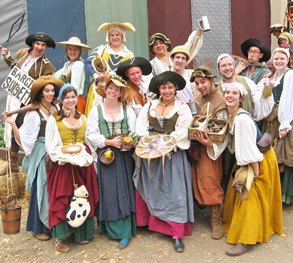 The Mongers Guild bring lower-class street vendors to life. Whether it’s pig’s ears, chicken feet, or bargain cures for your aches and pains, these relentless and determined street merchants will attempt to sell you anything. They also perform on the Salty Siren Stage in the Dockside Alley each afternoon in the hilarious and bawdy faire classic, Pye Powder Court. 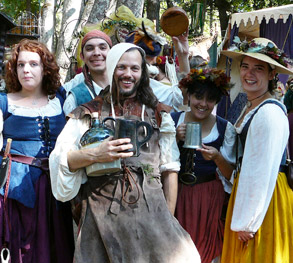 The Peasants of Saint Helena

No nation can be great without the strength of the peasantry, peoples full of earthy wisdom, practical knowledge, and ancient philosophy. The streets of any small town are full of these amazing Englishmen – any small town except ours that is! Most of the Peasants Guild of Saint Helenas is full of absurd wisdom, practically no knowledge, and crack pot philosophy. Seek out the poor farmers for a slice of country life that will amuse, confuse, and delight you! 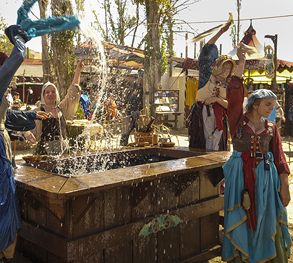 Some of hardest working people in the village, the washerwomen will delight you with their lively songs and gossip. Occasionally they manage to get some of the village laundry done. If you’ve got dirt, bring it to the well, they’ll make sure it gets shared with everyone. Beware of mudslinging.

For more dirt on the Washer Women, go to www.sainthunna@weebly.net 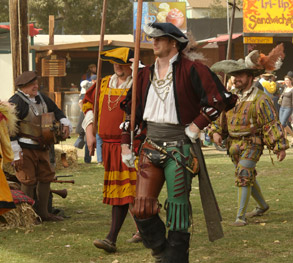 The renaissance witnessed great changes made in the art of warfare. Professional mercenary troops comprised of Germans, Dutch and Englishmen were highly prized throughout Europe for their importability into all manner of disputations. The Queen knew the value of men with negotiable loyalties. During times of peace they can be seen fully armed preparing and pacifying the path of Her Royal Majesty Elizabeth through the throngs of zealously adoring citizenry. 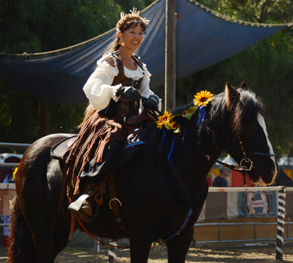 The Royal Equine Guild proudly presents their fine collection of horses. During their daily shows they will be featuring the Gypsy Horse and the American Gypsy Horse Breed Association. 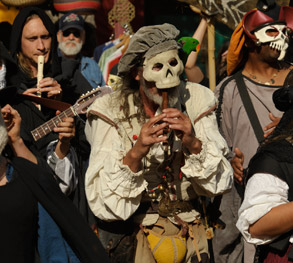 The tradition of the Danse Macabre is a cross-cultural phenomenon, occurring in the religion and folklore of the times. Some thought the images of skeletons dancing in the streets would intimidate Death so that none would be taken away. Others thought the objective was to trick Death into thinking all the villagers were already dead, so there was nothing for the figure of Death to do and He would pass by. Still others thought it was a way to point out no matter if you are Queen or serving wench, Bishop or beggar, minstrel or milliner… eventually we all will dance the Danse Macabre.